How to Get an Indiana Criminal Record Expungement

If you’re someone with a criminal record and you would like to get your criminal background sealed then you are looking for an Indiana criminal record expungement. Let’s talk about how to file for expungement in Indiana. Remember, when you need an Indianapolis expungement attorney, call the Law Office of Jesse K. Sanchez at 317-721-9858 for help today.

What is a Criminal Record Expungement

Expungement refers to the process of sealing arrest and conviction records. laws that allow people to expunge arrests and convictions from their records. When you are exploring your expungement options, you need to ask yourself the following questions.

Getting an Indiana criminal expungement can have several positive effects upon your life. If you are considering an expungement or your arrest records sealed, call 317-721-9858 today.

How is an Indiana Criminal Record Expungement Different According to the Indiana Second Chance Law or Indiana Expungement Statute, it is considered an unlawful form of discrimination for an employer or prospective employer to

They also are legally prohibited from otherwise discriminating against
any person because of a conviction or arrest record expunged or sealed under the Indiana Second Chance Law.

How to Get a Misdemeanor Expunged in Indiana

Obtaining an expungement in Indiana for a misdemeanor conviction is not a difficult process with a large number of restrictions. You can qualify for an Indiana criminal record expungement if you have completed the conditions of your sentence and a minimum of five years have passed since the date of your criminal conviction. Once you are ready to learn how to get your misdemeanor in Indiana expunged, call Indiana expungement lawyer Jesse K. Sanchez a call today at 317-721-9858!

How to Get a Felony Expunged in Indiana

If your Indiana expungement petition is denied by the judge, you are eligible to reapply for expungement every three years afterwards for the conviction for which the expungement was denied. This clause only applies to felonies OTHER THAN Level 6 or Class D.

The Cost to Expunge Record in Indiana

If you’re wondering what is the Indiana expungement cost then be prepared for the unexpected expense. The cost to expunge a felony, misdemeanor, arrest or pretrial diversion in Indiana can vary greatly based upon the county. Arrests and pretrial diversions are eligible to be expunged at no cost to the applicant. The cost range for an expungement in Indiana AS AN AVERAGE can cost anywhere from $850-$5,000

The Indiana Second Chance Law is a way of how to expunge your record and erase the stigma of having a felony, misdemeanor, arrest or pretrial diversion in Indiana. An Indiana expungement is a way that you can wipe the slate clean and it can be done at a cost that is affordable and attainable for you. When you are ready get a call criminal defense lawyer Jesse K. Sanchez at 317-721-9858 to get your Indiana felony expunged, a misdemeanor expunged, an arrest or pretrial diversion expunged today. 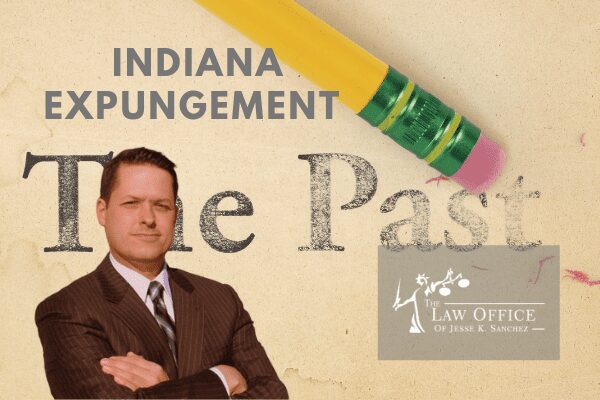