Indianapolis criminal defense attorney, Jesse K. Sanchez, has years of experience defending crimes of domestic violence, all felonies and misdemeanors. From domestic battery and invasion of privacy to strangulation, confinement and intimidation. Can the State prove their case? What are your defenses? What if the alleged victim does not want to proceed with the case? Get some answers: Call Jesse K. Sanchez for a free consultation.

Experienced in defending Indiana residents charged with domestic violence charges. These cases are always complex, and always necessitate a complete and thorough unbiased investigation. If you have been accused of this type of crime, you need to The Law Office of Jesse K, Sanchez at 317-721-9858 NOW! An Indiana domestic violence defense lawyer by your side when you need one the most.

What You Need to Know About Your Domestic Violence Charge

Can the State Prove Domestic Violence?

It’s one thing to accuse someone of a crime, it’s another thing to prove it. The most common crimes charged in a domestic violence court are:

Each of these crimes has specific elements that the State of Indiana must prove beyond a reasonable doubt in order to convict and sentence an individual. But what happens if it’s just two people and no other witnesses? What if it’s a “he said/she said?”

Contrary to popular belief, a person can be convicted on the basis of just one person’s testimony. She said he hit her. She said that his injuries were self-inflicted. No other evidence was uncovered by either side. Do we call that a tie and throw the case out? Not necessarily. This is what attorneys sometimes refer to as a “credibility contest.” And, if the alleged victim wins that contest, leaving the fact-finder firmly convinced in her side of the story, then the defendant may be convicted and sentenced.

This is why, when it comes to domestic violence cases, the details really matter. The history and dynamic quality of the relationships involved matter. The photos matter. The text messages. The shifting stories and motivations to lie.  At the Law Office of Jesse K. Sanchez, your attorney will know how to investigate and look for those details that affect credibility. For a more detailed discussion of domestic violence charges, contact me. 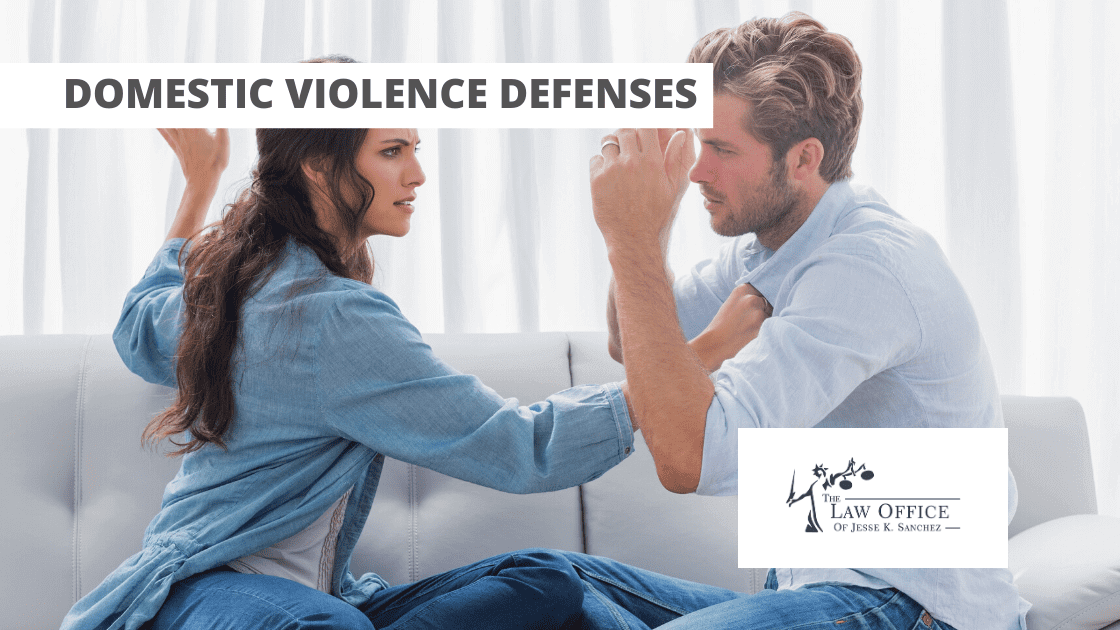 One of the most important things your attorney can do for you is to analyze the facts of your case to determine which defenses apply. In the area of domestic violence, the most common defense to a domestic violence charge is to assert the self-defense defense. Using self defense as a strategy can be very technical. However, there are other defenses available to someone charged with domestic violence.

At The Law Office of Jesse K. Sanchez, we are an experienced criminal defense law firm that will examine all of the merits of your case so that all applicable defenses are asserted. To learn more about your possible defenses to domestic violence charges, call our office at 317-721-9858 today.

What About the Victim?

Crimes of domestic violence are rarely simple. By definition, they involve a history and relationship between at least two parties. Often, whole families are traumatized in the prosecution of a domestic violence crime. Unfortunately, domestic violence prosecutors sometimes fail to recognize what’s truly at stake. Does the alleged victim rely on the defendant for support? Does the victim want to drop charges or feel that they, themselves, are at fault? Will children be affected by a long prison sentence?

Can the Alleged Victim Dictate the Outcome?

While a victim cannot dictate what happens in a case, an investigation into the viewpoint of the alleged victim is vital to preparing a full-throated defense and for seeking a just resolution. At the Law Office of Jesse K. Sanchez, your attorney will not fail to investigate each matter fully, including the victim’s perspective. To learn more, call a great criminal lawyer in Indianapolis.

Under Indiana and federal law, a crime of domestic violence has a very specific, technical definition. If you’ve been charged with a felony crime of domestic violence, there are several additional consequences. You need an attorney who understands the nuances of that definition in order to help you avoid the pitfalls and consequences that come along with a conviction.